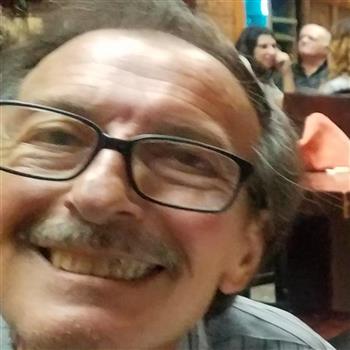 In Tribute of Vincenzo La Fronza

On December 1, 1948, Giuseppe La Fronza and Arcangela (Martulli) La Fronza welcomed their 2nd son Vincenzo. Raised in Carbonara, Italia, Vince was always surrounded by his 3 brothers and 1 sister. Growing up, he always was hands-on, whether working at his job carving wooden caskets or getting water from the local fontana for the house. Vince would give some of his hard earned money to his mom, but also would save some in a tiled hole under the bed. He loved his family and his home, but the American dream was calling him. On February 27, 1966, along with his siblings and cousins, the 17 year old embarked on a ship to New York. March 9, 1966, they arrived at Ellis Island. Some family was already in Chicago, so that became his home until the end. On Ohio Street, Vince met the love of his life, Matilda (Squeo). On their first date, they shared a sundae; 1 year later they married (almost 47 years) and had three girls, Angela, Anna, and Jennifer.

He was a hard worker, staying at Williams Electronics for 33 years when they closed down. He continued his manual labor working at the Hyatt and Wickes. Outside of work, Vince was always creating masterpieces at home, whether outside the house with his love of nature or fixing things around the house. Things always got done with love.

Vince had many passions: reading the newspaper, going for bike rides, and music. Music was his language of communication. Tutu, as his family adoringly called him, was always singing or playing his beloved trumpet. Vince loved to perform, whether it was at festivals or weddings or in his basement room decorated with pictures of him singing it his way. Often, you would hear him singing to his mamma, wife, children and grandchildren.

His grandchildren were his flowers that he loved immensely. He would watch them on days off, pick them up from school and put them to work making wine the old fashioned way by stomping on grapes in a bucket. But, he treated them like royalty. He had a sense of humor with them that only a grandparent shares, such as providing Giuseppina with a bell to ring if she wanted anything from him, such as his cooking concoctions. Antonella was always the one that would sing with him. They would sing, “Let’s go check the mail,” while they ran down the long driveway. Antonella and nonno would sing Con Te Partiro and end it with a zan zan sound. Vin was the boy he never had. He would take him for rides on his riding lawnmower. Nonnovino would always go to their events, proud and with his little camcorder.

Vince was a loved man by many. He had a gentle spirit, a zest for life, a talkative personality and an awareness of how blessed he was. He was a giving man until the end. When he was diagnosed with multiple myeloma, he gave that cancer such a fighting stance. Until the end, he would say, I’m going to live a long life, while enduring painful treatments. He would sing to the doctors and nurses and always share that contagious laugh. Vince was ready to go home to God, to see his mamma again; but, that didn’t stop him from singing My Way one last time. His melodic voice will always be in the hearts of many. On May 25, 2020, Vince was called Home to sing as an angel in Heaven’s Choir.

Thank to you those who have donated including but not limited to:
Rocco and Lucia Minnini


Help us honor our loved one while making a difference in myeloma research.


About the MMRF:
A pioneer in precision medicine, the Multiple Myeloma Research Foundation (MMRF) seeks to find a cure for all multiple myeloma patients by relentlessly pursuing innovations that accelerate the development of precision treatments for cancer. Founded in 1998 by Kathy Giusti, a multiple myeloma patient, and her twin sister Karen Andrews as a 501(c)(3) nonprofit organization, the MMRF has created the business model around cancer—from data to analytics to the clinic. The MMRF identifies barriers and then finds the solutions to overcome them, bringing in the best partners and aligning incentives in the industry to drive better outcomes for patients. Since its inception, the organization has collected thousands of samples and tissues, opened nearly 100 trials, helped bring 11 FDA-approved therapies to market, and built CoMMpass, the single largest genomic dataset for any cancer. Today, the MMRF is building on its legacy in genomics and is expanding into immune-oncology, as the combination of these two fields will be critical to making precision medicine possible for all patients. The MMRF has raised nearly $500 million and directs nearly 90% of the total funds to research and related programs. To learn more, visit themmrf.org.

Ella Lo Sapio
Dear Anna and family, we are so sorry again for your loss, and sorry that your dad had to suffer with this terrible cancer. He was an inspiration and fighter until the very end. We are praying for a cure so that other families don't have to endure this pain, and pray for you and your family to one day be at peace as well. Love, Ella & Antonio

Virginia Shamon
Those we love don't go away, They walk beside us every day... Unseen, unheard, but always near, Still loved, still missed, and very dear. Sincerest sympathy for you and your family During this difficult time.
5.

Anonymous
It’s terrible to hear about your loss and I express my sincere sympathy to you and your family. Love, Hikaru
6.

Anonymous
Dear Anna and Family, I am so sorry for your loss. I know this is such a difficult time. My thoughts are with you ♡♡ Love, Kim

Lauri Stocker
Praying for a cure!