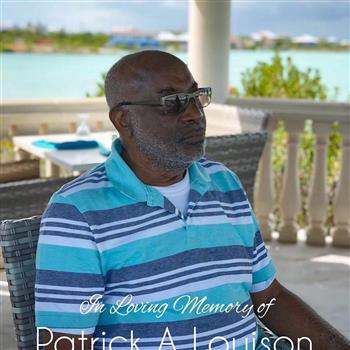 In Tribute of Patrick Allister Louison

Help us honor our loved one while making a difference in myeloma research.

Patrick (Pat) Louison, 76, of Ft. Lauderdale, FL transitioned on June 15th, 2019 in Silver Spring, MD.  He was born March 9th, 1943 in Grenada, W.I., the son of the late Edison and Maude Louison. Patrick is survived by his children, Gerard, Christopher Sr., Patricia, Trisha, Akeem and Darianna; brother Wilfred Griffith of Montreal, Canada and sister Pauline Louison of Barbados; he was preceded in death by his sister Jean and brothers Fabian and Winston.

Pat was married to the former Margaret William of Grenville, Grenada, Kathlyn John of Carriacou, and more recently to Shirley Polidore of Trinidad.  He had 5 grandchildren and many nieces and nephews. Pat attended the J.W. Fletcher Catholic Primary School in St. George’s, Grenada from 1948 to 1955 and the Presentation Boys College, Grenada 1955 to 1961.

A Memorial Celebration Service for the life of Patrick Louison (also known as ‘Pluto’ by friends and colleagues) will be held at 2pm on Saturday, July 27, 2019 at Holy Family Episcopal Church (18501 NW 7th Avenue, Miami Gardens, FL 33169) in Miami, Florida.  Final arrangements are in the care of Hari P. Close Funeral Service, P.A. located in Baltimore, MD.

Condolences and Tributes may be sent to aclose@haripclosefs.com.

In lieu of flowers, please make a donation here in Patrick Louison’s name to The Multiple Myeloma Research Foundation.

Schooling
Pat attended the J.W. Fletcher Catholic Primary School in St. George, Grenada from 1948 to 1955 from where he excelled, winning a scholarship to the prestigious Presentation Boys College, Grenada which he attended from 1955 to 1961. Childhood friends describe Pat as classy and a true gentleman. While there, he received commendations for Mathematics and Athletics, specifically football (soccer) and cricket.

Employment transition from Grenada to the Bahamas
Upon leaving high school, he was employed at Grenada’s Ministry of Education from 1962 to 1965.  A colleague from his working life at the Ministry noted that he was a quiet, but hardworking member of staff.  He worked diligently in his position there as a junior clerk, but it wasn’t long before he left Grenada’s shores for greener pastures, taking up a position in the Bahamas where he was beloved by all. He worked at Her Majesty’s Prison Service as the Clerk, commonly known as the Accountant here in the States.

Employment transition from the Bahamas to the United States
In Brooklyn, NY, he worked as the Security Manager for Korvettes Department Store for many years. After a few years, he grew tired of the cold and sought out warmer climates in Florida. Initially landing in Orlando and then Miami. In Miami, where he worked at the Miami International Airport for many years, primarily in service to Delta Airlines until his retirement. He was considered by a co-worker as a “professional employee with a positive attitude”.

Sports History
Pat was well known from his high school days as an avid soccer player who played a prominent role as a soccer player in one of the top popular Grenada teams after he left Presentation (high school).  He represented the Bahamas on that country’s soccer team during his stint in that country. He was a member of the Commonwealth Wanderers Cricket Team which toured England and Canada on several occasions as opening batsman. He was even offered a tryout with the Miami Dolphins of the NFL as a punter.

Pat displayed a very keen interest in sports in general throughout his life.  He was a member of the BWIA Sunjets Soccer team for several years in the 1980s while based in New York and could be found on most weekends in his later years, playing soccer with friends and against local teams in the Miami area, settling with Miami International Sports Club.


About the MMRF:
A pioneer in precision medicine, the Multiple Myeloma Research Foundation (MMRF) seeks to find a cure for all multiple myeloma patients by relentlessly pursuing innovations that accelerate the development of precision treatments for cancer. Founded in 1998 by Kathy Giusti, a multiple myeloma patient, and her twin sister Karen Andrews as a 501(c)(3) nonprofit organization, the MMRF has created the business model around cancer—from data to analytics to the clinic. The MMRF identifies barriers and then finds the solutions to overcome them, bringing in the best partners and aligning incentives in the industry to drive better outcomes for patients. Since its inception, the organization has collected thousands of samples and tissues, opened nearly 100 trials, helped bring 10 FDA-approved therapies to market, and built CoMMpass, the single largest genomic dataset for any cancer. Today, the MMRF is building on its legacy in genomics and is expanding into immune-oncology, as the combination of these two fields will be critical to making precision medicine possible for all patients. The MMRF has raised nearly $500 million and directs nearly 90% of the total funds to research and related programs. To learn more, visit themmrf.org.

Blair William
To: Gerard, Christopher and Patty, We continue to keep you in our thoughts and prayers at this time. Love, Blair and Rubia William

Deb And Mike Coburn
To honor a remarkable man who raised a tremendous daughter. Sending all our love to Patricia and Tony during these difficult times.

Justin Smith
In honor of our good friends Dad, who inspired her to be the woman she is today. We love you Patricia and Tony.